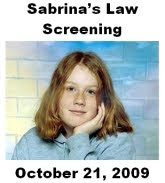 You are invited to attend a free public screening of Sabrina’s Law, produced by Lank/Beach Productions, Merit Motion Pictures, and the National Film Board of Canada. Sabrina’s Law profiles the story of the late allergy advocate, 13-year old Sabrina Shannon, whose legacy has influenced policy makers internationally.

Light beverages will be served.
Documentary not suitable for children due to sensitive subject matter.
at 7:14:00 AM