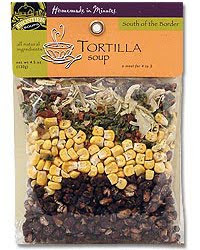 The soup was much more homemade in it's flavour, than a store bought soup usually is. I followed the instructions on the back adding precooked chicken, chicken broth, water and salsa. I choose a milder salsa, my children don't like food as spicy as I do, having said that I would use a medium spicy salsa if it where just me, because the soup had plenty of flavour.

The package said meal serves four to five people, it did us for dinner and a school lunch in a thermos. If I planed it out, I could have had chicken one meal then the next used the soup mix, I did use a store bought chicken broth. A great thing about this product is you can make it more or less home made, in thirty minutes.


Frontier Soups confirmed for me that "None of the packaged dried mixes contain milk or milk products". Tortilla has a list of gluten free soups on it's website.

Frontier Soups had to say this about their products and allergies:
A key advantage of Frontier Soups mixes is that the cook can control the additions according to taste preferences or dietary needs. None of the packaged dried mixes contain milk or milk products. When milk or cream is called for as a fresh addition soy milk or other substitutions can be made. A customer who is a runner avoids cream. For the Illinois Prairie Corn Chowder, she uses canned corn and purees it until is creamy, then uses that instead of cream in the recipe. Mashed potato is another way to achieve a creamy texture without using cream.

A majority of Frontier Soups 37 varieties are gluten free. Only soups with pasta packets, or barley as an ingredient or wheat berries contain gluten, and those soups have barley or wheat berries in their names. Soups that have a pasta packet can be prepared leaving out the pasta, and perhaps a bit less broth. Consumers will find gluten free soups clearly listed at frontiersoups.com