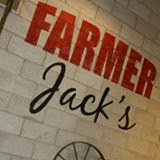 Cathy's Kombucha is fermented tea drink, that contains probiotics and is gluten and soy free. I talked to their representative, she said the factory is also nut and dairy free. At one point they produced a product that contains sulphites, but they no longer handle sulphites. Finding a dairy free probiotic that tastes like a treat was a wonder, we sampled a few drinks, and my whole family agreed we enjoyed them all.

Farmer Jack's also gave out samples of Bay Meats gluten free beef jerky. I have bought them in the past, at Farmer Jack's.

Eudora Foods was also at Farmer Jack's, last time I spoke to them they did not have any kind of precautionary statement on their products or website. I was pleased that the product now has "may contains statement" on their products. Eudora Foods now has this statement on their web site "All products are made in a shared kitchen that also produces products with gluten, wheat, dairy, nuts, mustard seed, egg and fish". I was glad to see this improvement.

No'oats Paleo Cereal was also at Jack's it is a granola cereal that is on it's way to earning gluten free certification! and is dairy free and follows the paleo diet.

Farmer Jack's Market is a small grocer, with a selection of fruit and vegetables, and other grocery items, they focus on healthy local foods like heirloom vegetables. Their foods are usually local, and sometimes organic. At the back of the store they sell vegan soups and smoothies, customers can also order veggie trays. Jack's Market is located in Burlington, Ontario, Canada, it is on the corner of Appleby and Fairview in a small plaza.

Full Disclosure: I was given samples, however I bought my own bottle of Cathy's Kombucha at Farmer Jack's. I am also a frequent customer of Farmer Jack's.
at 3:51:00 PM