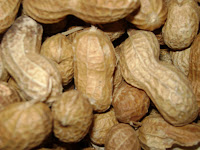 Biodiesel: An option for Southeast growers
Peanut Bio Fuel!
power your car with peanut oil?
From this article:

While edible peanuts and peanuts crushed for oil for human consumption may not be practical as a source for biodiesel, high oil-containing, non-edible peanuts grown as a separate crop could be one of the most efficient sources of renewable fuel available for Southeast farmers to grow.

Vehicles used by University of Georgia researchers and vehicles used at the Sunbelt Ag Expo have been powered by peanut biodiesel for the past few years. Cost aside, the engine cleaning capabilities alone have drawn rave reviews by those using peanut-powered vehicles.
Wilson Faircloth, a research agronomist at the USDA’s National Peanut Lab in Dawson, Ga. has tested a number of non-edible, high oil peanut varieties over the past years, and has recorded some astounding production numbers for peanut-biodiesel production.

Georganic, a high oil producing variety with little, if any value, as an edible peanut has been one of the top producing lines tested in Faircloth’s project. While soybeans routinely produce approximately 50 gallons per acre of usable biodiesel, Georganic peanuts have consistently topped 100 gallons per acre, frequently producing the 125-130 gallon per acre range.

It is often noted by peanut farmers and researchers that the first diesel engine introduced into the U.S. at a World Fair in the early 1900s was powered by peanuts.

YIKES! I live in the SE US. We don't have peanut allergy but I'm going to mention this to our food allergy group. Thanks for posting.