When I was in high school,  I developed a rash on my hands,  that would come and go.  After a while I concluded the rash would come after I went to the washroom in the west wing of the school, but not after using the washrooms in the other wings of the school. The rash looked similar to the reactions I still have, if I handle dandelions. 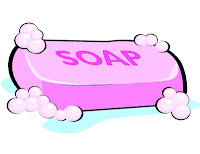 I spoke to one of the teachers who taught near the west wing washroom with the washrooms with the soap that I thought I had a problem with.  We concluded the person to talk to was the head custodian.

The custodian, explained that he ordered a new hand soap, and planned to replace the old soaps in all the washrooms, with a new soap. We both agreed I was allergic to the new soap that he was putting in the west wing washrooms.  We brained stormed what to do, being afraid I would not be able to wash my hands using school soap, I thought about having to bring my own soap each day to school.

My rash went away, the next week the custodian reported to me that he was able to stop the orders of the new soap,  and he would continue ordering the old soap.  We looked at the ingredient lists of the soaps and were not able to figure out the ingredient that I was allergic to.

This story happened many years ago, but it could happen today.  Everyone at the school (not just teachers) should know about your (or your child's) allergy/ allergies.  A little school cooperation goes along way.

See Also:
Soap Made From Nuts in Doctors Office