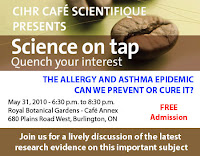 I attended the presentation hosted by AllerGen called The Allergy Asthma Epidemic, Can We Prevent or Cure it

The first half of the presentation the speakers spoke about allergies and asthma the second half they attempted to answer questions from the audience. The speakers included Dr. Judah Denburg, Dr. Allan Becker, Dr. Ann Clarke and Dr. Malcolm Sears.

They spoke about research being done as well as how they collect information for their research. They also spent a great deal of time promoting AllerGen.

It was interesting to hear how various studies are done, as well as those still under way. I also found interesting, the idea of following infants from in the womb into childhood and recording allergic and asthma reactions as well as parental choices such as breastfeeding, over cleaning and timing of food introduction. The idea of maternal stress on the mother, effecting her unborn baby and leading to the child having allergies was also disscussed as a topic that was just beginning to be explored by researchers.

I found it alarming how little the speakers knew, about the things most important to families, they knew little about Sabrina's Law they were not sure at first that it was milk that caused her reaction and even spoke of it, as if it was a school nut policy, only.

Health Canada Allergen Labelling also came up but they spoke of it, as if Health Canada was going full forth with full disclosure of ingredients when Health Canada's original time line for the law was "by 2002". They also spoke of it, as if using casein instead of milk was the issue, not manufacturers hiding or not aware of all the allergens in things like natural flavourings and caramel. Their comments about "may contain" made me even more confused as how they saw Health Canada's intentions toward precautionary labelling would be done.

The question or possibility of modified foods causing allergies was brought up by an audience member, but was not directly answered.

Questions of food introduction, siblings of allergic children and other hopeful research was always followed by "We don't know enough" and the "We need more research". I do agree that we need more research, but what do you know so far?

The question of why milk allergy is given so little attention was asked. The answers given was a mix of hard to study because of confusion with lactose intolerance, and milk allergy was often out grown. Their was little to no mention of less common allergies, the word corn was never used for instance.

According to AllerGen information:
AllerGen NCE Inc., the Allergy, Genes and Environmental Network, (est 2004), is a national network funded by Industry the Networks of Centres of Excellence (NCE) Program. Allergen's mandate is to support research, networking, commercialization, knowledge mobilization and capacity building activities that contribute to reducing the morbidity, morality and socio-economic impacts of allergic disease.
at 6:07:00 AM